This year’s annual commemoration of Workers’ Memorial Day – an event that takes place for trade unionists and members of the labour movement to pay tribute to the thousands of workers who have died unnecessarily in the workplace, had something of a special significance. York & District TUC celebrated its 125th anniversary in 2015 – 125 years of workers organising themselves into a movement that eventually would lead to the formation of the Labour Party, and almost a century later, the passing of the Health & Safety at Work Act 1974 by a newly-elected Labour Government.

On 29th April, leading trade unionists and members of the public gathered at All Saints Church, Pavement to hear the Reverend Canon Derek Earis conduct a sermon in special commemoration for the dead, and to hear renowned Yorkshire working class poet Ian McMillan read a composition in memory of the many thousands who had lost their lives during the course of the industrial revolution – and the many thousands more who had lost their lives just as needlessly in the modern age. Ian McMillan’s poetry is legendary among the working class movement, and his eloquent words a poignant reminder of the tragedy for thousands of families whose loved ones who had died in the course of their work, and in the industrialisation of modern Britain:

“For the ones who never came home”

For the ones who stayed down ‘cos they must

For the thin ones gripped by cold

For the ones who wheezed in harsh white dust

For the young ones who looked old

For the nameless ones whose light went out

For the ones who tried to run

For the trembling ones at the gaffer’s shout

For the ones scorched by the sun

This is the time to remember who

Stood every day in the winding queue

For the ones who rode the rattling rails

For the sweating ones at dawn

For the ones asleep by the broken sails

For the bending ones on Master’s lawn

For the nervous ones who daren’t ask

For the ones who helped their mates

For the strong ones who broke every task

For the ones who lifted crates

This is a time to remember those

Who wilted as the fierce heat rose

For the ones who took care of the rest

For the helpful ones and kind

For the ones with fire across their chest

For the squinting ones who are going blind

For the weeping ones on the factory bus

For the ones who make you smile

For the stoic ones who make no fuss

For the ones who go the extra mile

This is a time under darkened skies

For the ones who cried out ‘Organise!’

Ian’s poignant poem was followed by key speakers who included Regional TUC Secretary Bill Adams, who pointed out that regardless of the result of the upcoming European Union referendum, Health & Safety Law should not be sacrificed on the altar of profit, nor be seen as “red tape” by employers eager to cut restrictions put in place to protect their employees. Rachael Maskell MP spoke of the honour of serving her constituency, which had a historic role in several key industrial sectors such as the railways and the confectionary trade, and that as an MP, she should fight tooth and nail to resist any attempts by the Tories to water down health and safety legislation to make the country more “competitive”. China may well be a mighty industrial powerhouse – as was the Soviet Union – but at what cost to the ordinary worker, trapped in low pay and unsafe working conditions? Leigh Wilks, President of York & District TUC and a member of the Regional TUC Executive, referred to those who had perished over the years as “our working class martyrs” who, despite the passing of the years, should never be forgotten, and would always be honoured as heroes. He said that unfortunately no workplace could ever be made 100% safe, but that it was our duty to ensure that in the modern world, our workplaces should be as safe as possible – and that the suffering of those in the past should cause us to learn, and therefore benefit the lives of their descendants in the future through making modern workplaces as safe as possible. “He who learns must suffer,” he said, quoting the Greek poet Aeschylus, “Because even as we sleep, pain we cannot forget falls drop by drop upon the heart; until in our own despair – and against our will – comes wisdom, through the awful grace of God.”

To complete the evening, a collection plate was passed around, the proceeds of which were donated to the victims of Mesothelioma, a disease which was rife in York’s railway and construction industries before the dangers of asbestos towards humans was fully recognised, and a disease which, sadly, is still killing thousands today. “We have a duty to those suffering these terrible industrial diseases,” Mr Wilks said. “And in this day and age, there is absolutely no excuse for any call for the relaxation of health and safety regulation, and any Government which seeks to do so under the guise of “cutting red tape” is an immoral Government that is in no way fit for office, and which does not deserve the support of the people, but their contempt.” 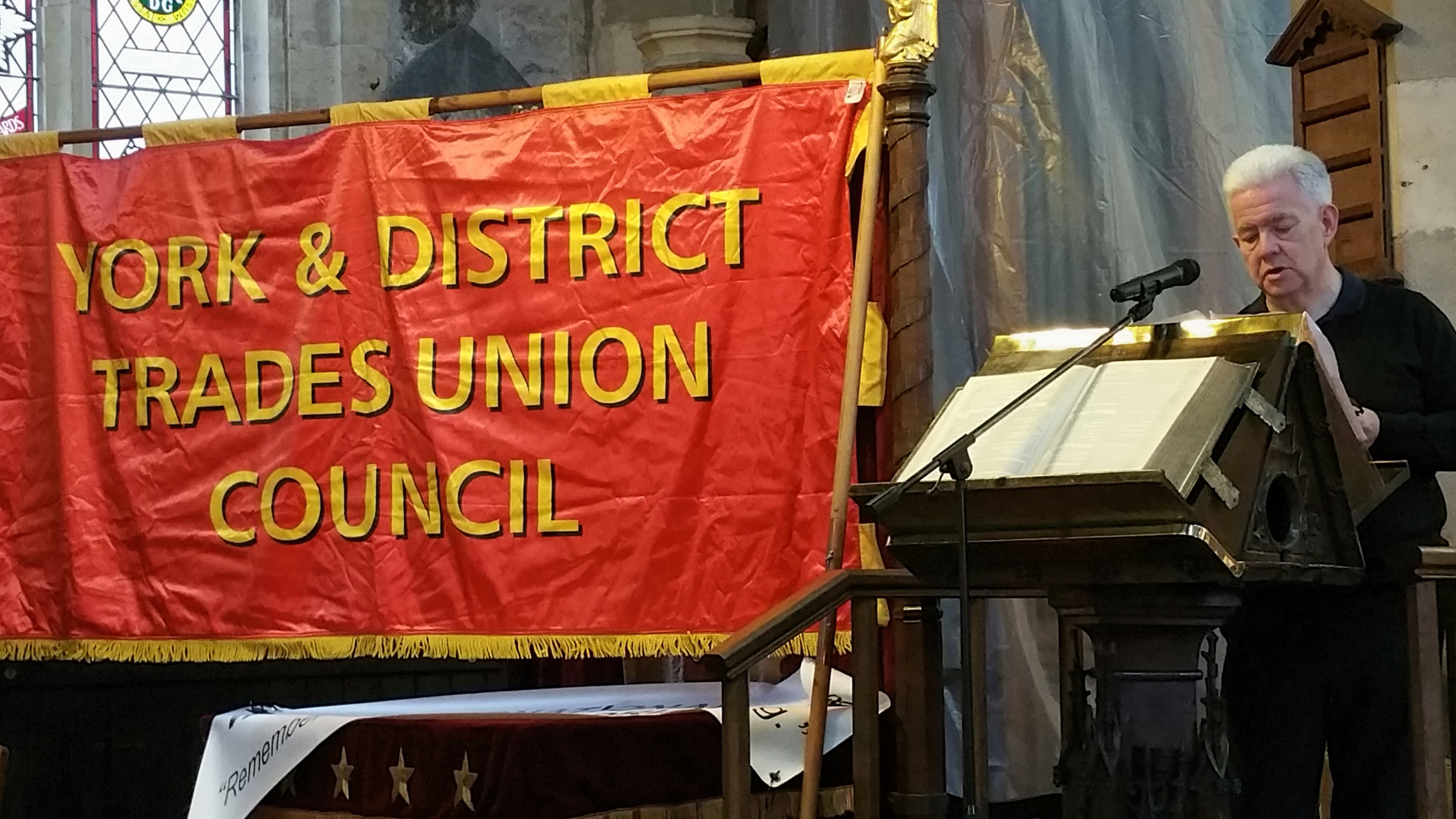 Ian McMillan signs the Book of Remembrance bought for the occasion 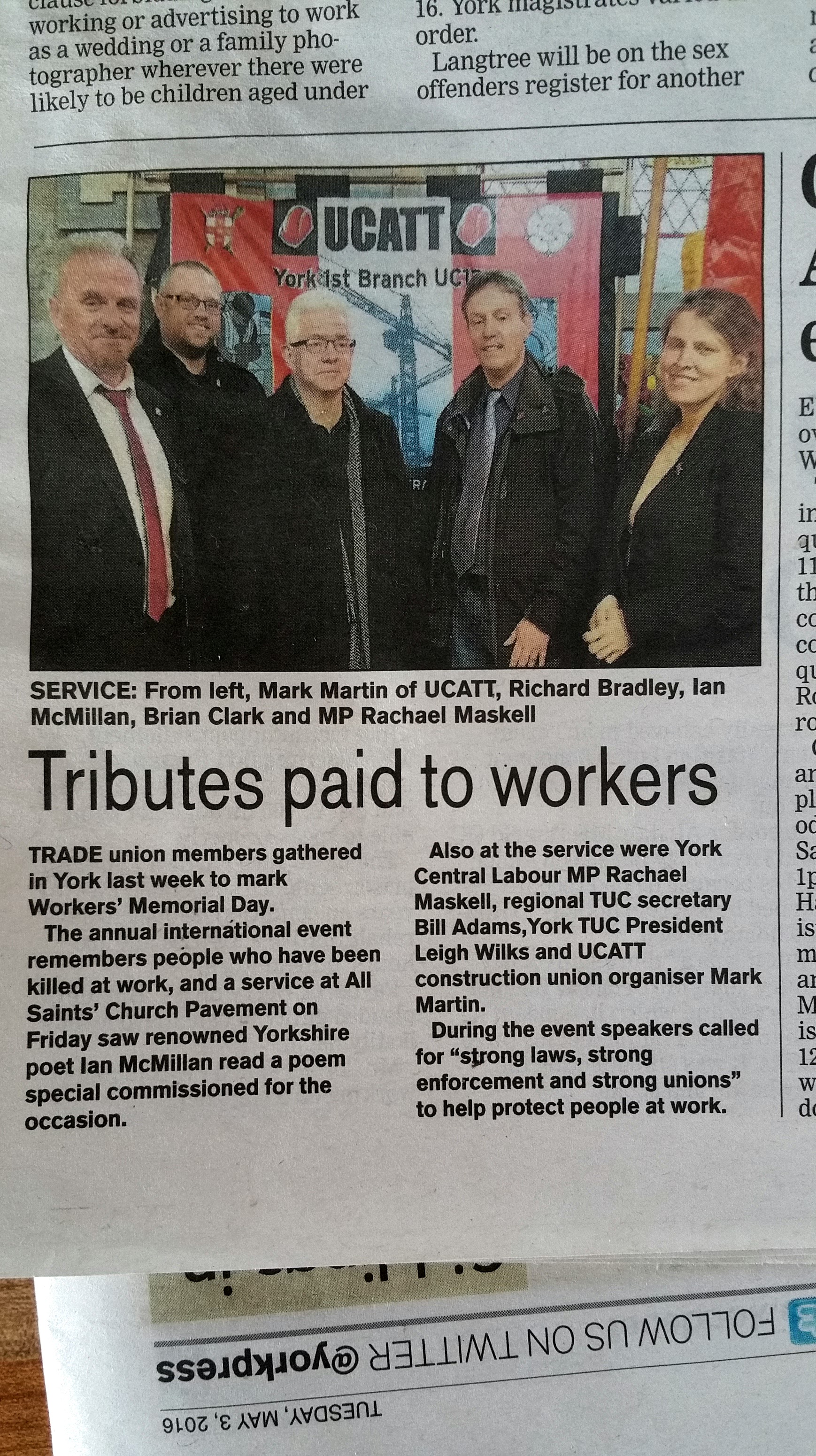 Press coverage of the event

Please see the message below which has come via the Yorkshire & Humber TUC about an event taking place in...

The Royal College of Midwives have a vacancy for a Project Worker on their Maternity Support Worker (MSW) project, and...

Further news from Unite the Resistance in York: Hunt’s ‘snub’ to NHS staff on pay sparks four-hour strike on 24...

There are no upcoming events.